A Landmark Of A Photo 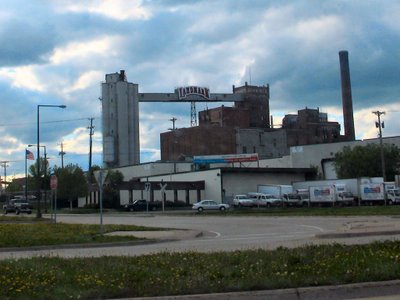 This shot is taken from Sheppard Road in St Paul which travels along the Mississippi River of the Landmark brewery. The brewery used to be the Schmidt Brewery up until the 1990's. Before the change in ownership/name for the brewery, the letters SCHMIDT were displayed along the bridge between the Schmidt's tower and the silo's. The letters were attached along the entire strip in bright red neon letters and could be scene for miles. The letters would power on one letter at a time and then the entire name would flash on and off four a couple of cycles and then it would start over again. Today the Landmark sign is small in comparison and I have no idea if it has lights for the night time. It's a childhood memory that I can still envision to this day, but will never been see the night sky again. My dad told me once that a few of the letters were not lit up one evening, perhaps from a disgruntled worker, the letters "C" "M" and "D" were all blanked out and yes, the word S H I T was displayed for all to see.
Posted by Steve Cuddihy at 1:01 AM

Even if that story isn't true it's worth telling, wonder if an employee pulled the C M & D on purpose!?

That is too funny! I totally remember the Schmidt brewery sign, kinda bummed that it is gone. Our family will be up there next week to freeze... I can't wait! (we live in FL) I hope my boys will get to see real snow on the ground... not just the crummy/melty stuff!