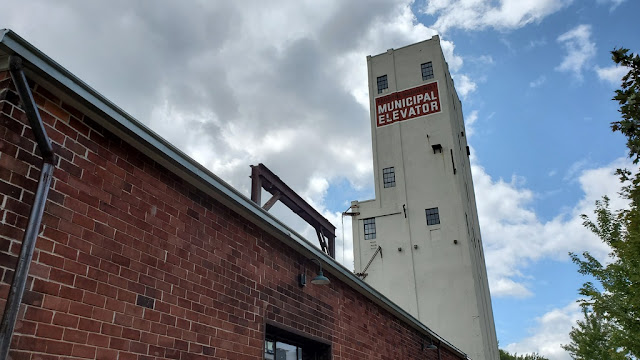 It has been a while since I've captured the old Saint Paul Municipal Elevator. Actually, it's been a really long times since I've posted on my photo blog. I was bored, it felt like a chore, lost interest, no time. Take your pick, but it's a combination of all of those.

Anyway, the last time I posted a photo of the tower, it was unpainted, falling apart, and looked like it should be torn down. Today it is restored, at least on the outside, and connects to the City House building. When we first were here, it was called the Red River Kitchen, but it is under new management and I would guess the name change. We love coming here for food, drinks and a walk along the Mississippi River and you would as well.
Posted by Steve Cuddihy at 8:34 AM
Labels: faces, i see faces, mississippi river, st paul, towers
Location: 258 Mill St, St Paul, MN 55102, USA