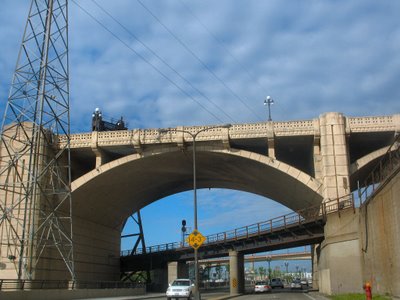 There's not too many places where you can drive under two separate bridges at the same time, but at this point on Sheppard Road, the Robert Street Bridge and the Railroad bridge all intersect at this point. The railroad bridge is quite a piece of history. You can just see the top most portion of one side of the lift bridge that is needed as it crosses the Mississippi River. I'll have to get a photo of the lift bridge one of these days.

The Robert Street Bridge was rebuilt over ten years ago. They kept the original design of the bridge, but gave it all new concrete. It is one of two bridges that connects the lower West Side to downtown St Paul. There is also a very large decal on the bridge on the large pillar at the far left that I have no clue what it says. It has got me very curious about it and I'll have to get a closer look someday.
Posted by Steve Cuddihy at 3:14 PM