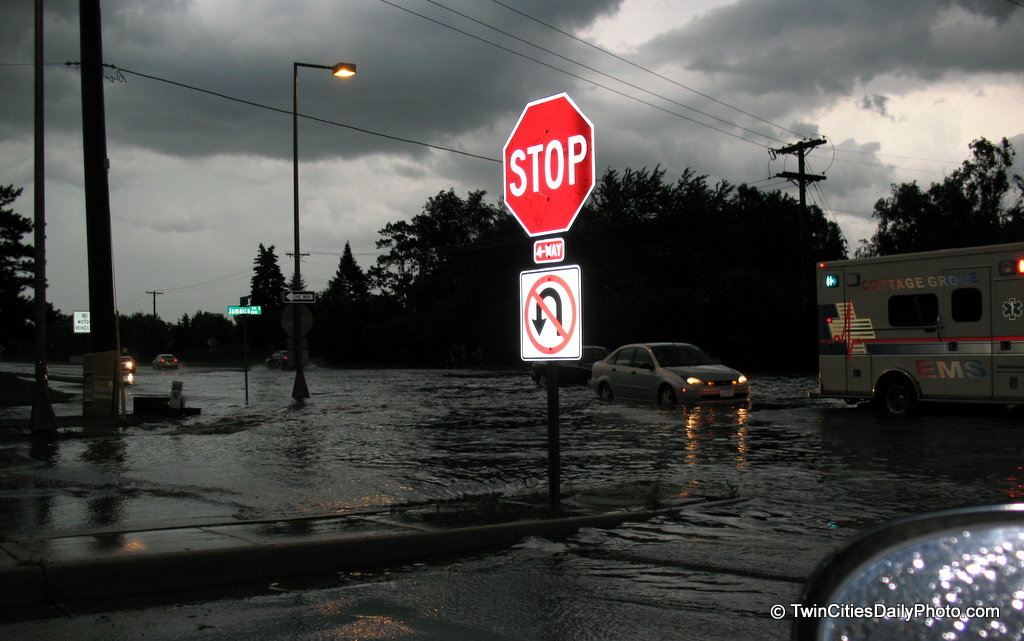 As I type, the second round of severe thunderstorms roll through the Twin Cities. The second night is more to the southern part, but just north enough to clip the city I live in Cottage Grove. My drive home from work last night was an adventure. I was expecting rain when I left my work place, and boy did I get rain. As I headed into the real heavy rains, I saw just ahead of me, what looked like the clouds had fallen from the sky. It was just pure white, as I hit, what I thought was clouds, it was raining like I'd never seen before.

At one point, I had to get off of the highway and wait for the rain to slow up as I couldn't see but five feet in front of me. Once I let the heavy stuff pass, I continued on my way. I drove through the back roads of Newport to get to Cottage Grove. Newport had been hit hard by the storm. I saw branches down, leaves on the ground like it was fall, trees in the road. There was several sections of the road where I tree, or two trees had fallen into the road. I had to drive on the shoulder of the road just to pass the tree.

The flooded road in today's photo was due to the heavy rains. I'm unsure if the sewer drains were plugged or if they couldn't handle any more water. This section of road was flooded. It was the four way stop at 80th Street and Jamaica Avenue.

Once I did make it home, the really heavy rains picked up for a second round. We were watching it pour out in the streets, there was hail, there was lightening, the street in front of my home almost became a lake as the waters from curb to curb almost were touching. Once the rains slowed, I went into my office, which is in the basement of my home. Oh no, there was water leaking into my office. It wasn't too much water, but my entire desk area had a pool of water around it. Yes, my two computers and all of my electrical work was sitting in the pool of water. I unplugged the outlets from the wall and salvaged what I could.

As of this evening, I have a fairly dry office, my electrical work is safely off of the ground in case the storm outside unleashes more heavy rain. I spent all afternoon removing most everything from my office so I could dry it out and get things set back up safely once again. What a storm it was.