You'll Never Guess This One 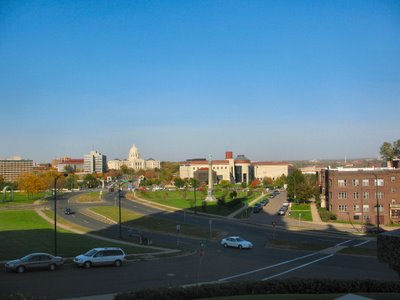 You'd never guess what I am actually taking a photo of in today's photo. Yes, it's part of what I posted yesterday, but I was focusing on the statue yesterday. Today is something that's not scene, but is a predominate part of the photo. I've never actually taken a photo of today's subject intentionally before, but it's so overlooked. Instead of making a guessing game of it, I'll just tell y'all because there hasn't been much traffic here with the busy holiday season going on now.

So what is today's subject, I know, get on with it already....Drum roll please....I'm taking a photo of the shadow of the Cathedral in St Paul that is directly behind me where I was standing. It just stood out as such a large figure that I thought I would try and capture it to see what it looked like in a photo. [photo of the cathedral for reference]
Posted by Steve Cuddihy at 1:13 AM

Yes, now I see it. I would have looked at all the usual sights for a long time, trying to figure out what had captured your lens today - but now I see the cathedral every time I look at the photo.

That's quite nice to see, Slinger.

Have a happy, merry one, Slinger Family. It's Eve here already.

Wow, I never noticed how much of a shadow the cathedral casts. The cathedral doesn't seem that big from afar, but up close it is just amazing.

well first thought is the cathedral .. and if not that then the statue in the middle :)

Merry Christmas & Happy New Year Slinger & family! Your photos are excellent, as always, and I love the crisp blue sky in this one... The air actually *looks* clean & crisp! Thanks for the time you spend taking & posting these great photos! Always makes me wish I were home!